A Boeing 737 on the assembly line in Renton, Wash. Aircraft and their parts are the single largest American export to China, making Boeing a tempting target in a trade war.

In the escalating economic showdown between the United States and China, President Trump is trying to put American shoppers first. The administration did not place tariffs on necessities like shoes and clothes, and mostly spared smartphones from the 25 percent levy on Chinese goods announced this week.

But by shielding consumers, Mr. Trump has put American manufacturers — a group he has championed — in the cross hairs of a potential global trade war. If the measures stand, along with China’s retaliatory tariffs, they could snuff out a manufacturing recovery just beginning to gain steam.

“If you want to spare the consumer so you don’t get this massive backlash against your tariffs, then there goes manufacturing, because that’s what’s left,” said Monica de Bolle, an economist at the Peterson Institute for International Economics. “The irony is, you cannot spare manufacturing from anything because manufacturing is globally integrated. The sector sources its parts and components from all over the world.”

That intricate supply chain often runs directly between the two countries, sometimes in both directions. Chinese factories make wing panels and doors for Boeing’s Next Generation 737 planes, which are assembled by union workers in Renton, Wash. General Motors makes its Buick Envision, a sport-utility vehicle, in Shandong Province, and sells it to American consumers. Construction workers in Denver use building materials manufactured in China, made in part from ethane gas produced in Texas.

A central aim of Mr. Trump’s America First agenda is to bring back pieces of the supply chain lying outside the country. The tariffs announced this week are just a bargaining point in a broader negotiation between the United States and China over trade.

“They are trying to force end-product manufacturers here to use more American content by making it more expensive for them to use Chinese content,” said William Reinsch, a trade expert at the Center for Strategic and International Studies.

The result is a list of more than 1,300 targets, many of them obscure products that may not deliver a direct hit to consumers’ wallets. The victims include industrial robots, chemicals, medical devices and heavy machinery used in everything from processing food to crushing rock.

Such industries have been a vibrant piece of the economy, adding 224,000 jobs in the past year, the strongest growth since the recession ended nearly nine years ago. But underpinning that rebound has been a strong global appetite for American goods — demand that could now be weakened.

“This is a pretty tenuous recovery, and employment is still at much lower levels than it was before the crisis,” said Mark Muro, an economist at the Brookings Institution. “This is not a super dynamic, healthy industry.”

Recent job growth has been concentrated in industries that could be affected by American tariffs on China, Chinese tariffs on the United States, or both. 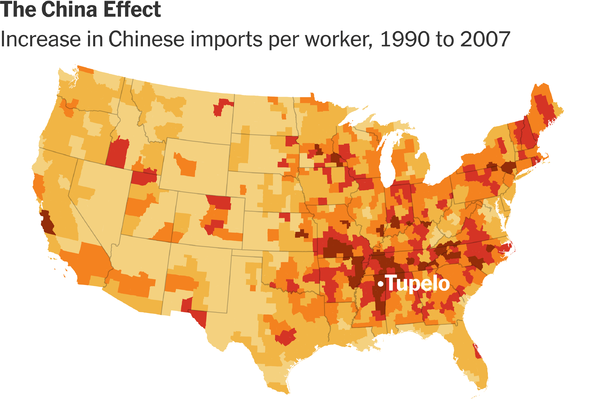 How Trump’s Protectionism Could Backfire

President Trump’s tariffs against steel and aluminum imports, designed to protect blue-collar workers, could instead undermine their livelihood.

Some of the strongest gains in the past year have come from makers of metal products, industrial machinery and transportation equipment. All those industries rely heavily on steel and aluminum, goods that Mr. Trump hit with tariffs earlier this year in a move aimed indirectly at China’s production.

In the latest salvos, the United States took aim at a multitude of technical components — items like circuit breakers, consoles and touch screens. Those tariffs could raise costs for electronics manufacturers, who have been hiring more aggressively lately and whose supply chains run through China.

Beijing, for its part, zeroed in on an array of American products, including plastics, a fast-growing export. Chinese companies imported $3.2 billion worth of plastic resins from the United States in 2017, according to the American Chemistry Council, a trade group. Chinese factories turn those resins into building materials, automobile instrument panels, eyeglasses and thousands of other products, many of which end up back in the United States.

The plastics tariffs alone could send ripples deep into Trump country. In recent years, companies have announced billions of dollars of investments seeking to capitalize on the boom in American natural-gas production. Some of those investments were to go into new plants in Pennsylvania, Ohio and other states to turn gas into chemicals and plastics, much of it bound for China.

Companies aren’t likely to abandon those plans overnight, said Calvin M. Dooley, president of the American Chemistry Council. But if the trade barriers persist, projects could be in jeopardy. “That is going to impede our ability to capitalize on that competitive advantage,” Mr. Dooley said.

Even with the flurry of measures and countermeasures between the United States and China, the moves so far have touched only a fraction of their $650 billion in annual trade. But they are beginning to signal how much damage could be caused, and who would suffer most.

In some cases, the tariffs seem intended to deliver a message rather than a fatal blow. The United States said it would impose tariffs on aircraft parts — an important and high-profile American industry, but not one facing much competition from China. Beijing said it would impose tariffs on cars and S.U.V.s, the third-largest American export to the country. But the move may not hit American automakers as hard as it might seem.

China already has a 25 percent tariff on imported cars, so General Motors, Fiat Chrysler and Ford have all agreed to manufacture inside the country as joint ventures with domestic producers, to avoid the extra charge to consumers. Foreign carmakers operating in the United States — Daimler and BMW — do send vehicles to China from factories in the Southeast. A report by analysts at Evercore ISI suggests that those companies, rather than the Detroit automakers, would bear the brunt of the Chinese levies.

Tesla might have the most to lose. The electric-car company had been lobbying hard for permission to produce cars in Shanghai, but hasn’t reached a deal. It sends vehicles to the Chinese market from its plant in Fremont, Calif., and its chief executive, Elon Musk, has expressed frustration even at the existing duties.

Aircraft and their parts are the largest single category of American exports to China, making Boeing a big target. For now, though, Beijing seems to be moving slowly. It said it would impose tariffs on planes between 15,000 and 45,000 kilograms, which includes some older models that Chinese buyers have ordered from Boeing. But it seemed to stop conspicuously short of whacking the company’s newer 737 MAX 8, which weighs 45,070 kilograms empty.

That near miss is meant to convey to Boeing, and Mr. Trump, what China is capable of, said Richard L. Aboulafia, a longtime aviation and aerospace analyst at the Teal Group.

“Their attitude toward a trade war assumes that the other side will lie down and stay horizontal,” Mr. Aboulafia said. “I’m not sure the easy and fun approach to trade wars holds up against return fire.”

As Trade Fight Escalates, Beer Makers Fret Over the Cost of Aluminum

Belatedly, The Indianapolis Star Gets Its Due for Gymnastics Investigation

Come the Recession, Don’t Count on That Safety Net